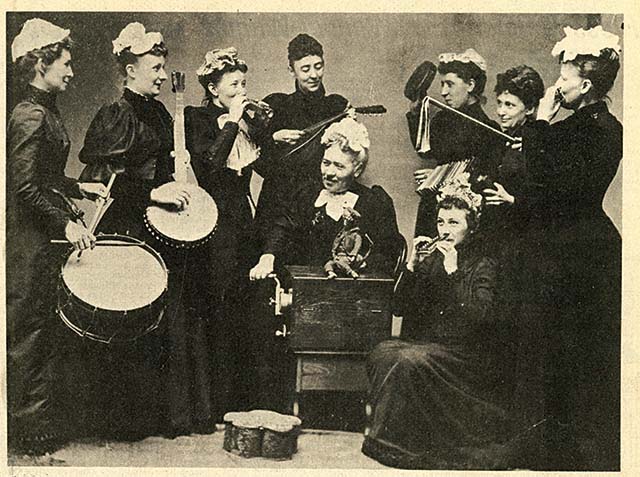 “As we felt the necessity of the civilizing influence of music in our semi-savage state, a band of young men was formed, led by John Mullin. Time hung heavy; money and girls, two prime necessities of life, were scarce.”

The earliest mention of a community band in Northfield appears to be these words from Hiram Scriver’s address to the Old Settlers’ Association on Jan. 27, 1876, about the early years after John North founded the town in 1855. Scriver was the first true merchant in Northfield and first mayor under the city charter.

One can find scattered newspaper references to Northfield bands over the next few years, including a band taking part in a joint meeting of the Northfield and Faribault Old Settlers’ Associations in 1882. The Rice County Journal of Feb. 23 reported that the Faribault contingent was met at the railroad depot, then “headed by the Northfield band, marched to Mill Square,” and all marched up the hill to the Congregational Church for dinner (where 500 people were served). Afterwards the band “played several fine selections” and “escorted the procession to Lockwood’s opera house” for speeches and singing.

An engaging picture from the 1880s shows nine women posing with a variety of instruments in what is billed as the Northfield Chautauqua band at a “guest night party” at the home of Mrs. I.D. Wilson. Whether these women ever performed in public or were just “jamming” is not known. The choice of name probably has some connection to the Chautauqua movement organized in 1874 in New York. However, the first traveling Chautauqua Circuit did not reach Northfield until June of 1914. Reaching its peak in the 1920s, Chautauqua featured a week of programs held in tents which brought culture and entertainment to towns, including lectures and musical performances. (The July 3, 1914, Northfield News pronounced the first Chautauqua a success, while disparaging the band which opened the event, saying, “The Northfield public is familiar with good band music, especially better ensemble playing than that displayed by Liberati’s band.”)

On June 17, 1893, the St. Olaf cornet band gave what the Northfield News of June 24 called “the first annual concert” in Central Park which was “looked forward to with a great deal of expectancy by both the students and the citizens.” The News reported, “The evening was clear and beautiful and a large audience was scattered about the park at an early hour. As the time for the program approached, the space about the bandstand became alive with people and a number of vehicles were stretched along in the streets adjoining the park.” Band pieces included, “Down on the Farm,” “The Old Church Organ,” “Recollections of the War” and “Grand March Westwood.”

The  Modern Woodman of America band presented 12 free open-air concerts in the summer of 1911 on an elevated stage on Bridge Square. The M.W.A. was a fraternal organization with a hall downtown. The band, directed by Professor Gustaf Santino, drew a large audience from both Northfield and Faribault and was supported by local businesses and the Commercial Club. Maggie Lee wrote in the June 14, 2006, Northfield News, about Santino, son of an Austrian nobleman, who came to the United States from Germany and enlisted in the Civil War as a musician and drum major, later organized a drum corps for Civil War veterans and was a school band instructor. He had also been a member of John Philip Sousa’s military band.

“Less Noise Wanted at Band Concerts” was the headline of a Northfield Independent article on Aug. 12, 1915. The story began, “The Independent has been repeatedly requested to urge silence on the part of the audience during the music at the weekly concerts in the park by the city band.” (This would be Central Park.) “Common courtesy” and “a proper respect for others” was requested: “As it is now, the concerts do not give a very favorable impression to people from outside the city. During the music, frequent noises, such as automobiles driven with mufflers open, and so forth, make it impossible to hear and cause the interested listener to leave in disgust.” Securing seating was also a problem: “Many ladies, frequently with children, walk some distance to hear the band play. When they arrive at the park, they are already fatigued. As the grass is too damp to be seated on the lawn, they are forced to stand, and when the intermission comes many are ready to leave for home.” Another distraction: “children who are romping noisily.”

The need for funds for the Northfield City Band prompted them to put on a minstrel show in January of 1916. Not at all politically correct by today’s standards, white men in blackface was popular entertainment early in the 20th century. The headline of the Northfield Independent of Jan. 20, 1916, was “City to Laugh at Minstrels; Local Burnt Cork Artists Will Make Town Sit Up and Take Notice.” The chosen songs “have that swing to them that will have the entire auditorium swaying in their seats. The ballads are beautiful and are in the hands of the best singers in our city. But just wait until you hear some of the jokes these burnt cork comedians are going to tell on some of their friends…The singing of the big chorus augmented by Mr. Mohn‘s concert orchestra is to be one of the big features of the show.” Men were encouraged to buy two tickets “and it will prompt your wife to jolly you in buying plumes for her spring bonnet.”

“Minstrels Prove a Big Drawing Card” was the headline of the Jan. 27, 1916, Independent. The locals “kept the audience in one fit of laughter” between musical numbers and the Charles Lindholm traveling vaudeville company concluded the program with comic sketches. “The band boys are to be congratulated on the splendid success of the entertainment,” the reporter wrote.

In 1927, an article on April 28 in the Independent said that several years had elapsed since the city had weekly summer band concerts. That summer a band, supported by town citizens, was formed by 17 local musicians and directed by George W. Mohn, son of St. Olaf’s first president, Thorbjörn Mohn. Large crowds came to the concerts and in August there was an exchange with the Faribault band and a joint band concert with the Cannon Falls Band. But by 1930, money was scarce and the future of a summer band was in doubt until citizens established a band fund and collected $783 so the season could start on July 1. Mohn was still leading the now 26-piece band.

There was another band within the community of Northfield which had a successful run of performances. It was composed of children. In 1899 the Odd Fellows Home was built at the site of the present Three Links on Forest Avenue in Northfield, opening first as an orphanage and then as a care site for the elderly. By 1927, the Home was housing 39 boys, 20 girls, 42 men and 23 women. The Odd Fellows Children’s Band played in June of 1927 before 8,000 people at the first annual state picnic of Odd Fellows in Northfield. In 1930, the Odd Fellows Children’s Band was continuing to thrive, playing at homecoming events in Northfield and giving concerts in Duluth, Hibbing, Plainview and Brainerd. A picture of the band in 1930 shows 20 band members and Charles Owen, director and Superintendent of the Home.

Along with the popcorn wagon on Bridge Square, community band concerts have been a cherished tradition of Northfield for many years. Residents are encouraged to bring folding chairs. 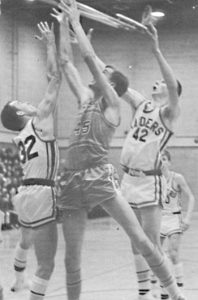 The Bundgaard-Finholt Era of Basketball in Northfield 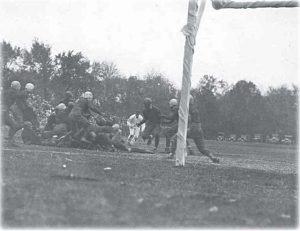 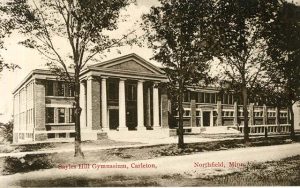