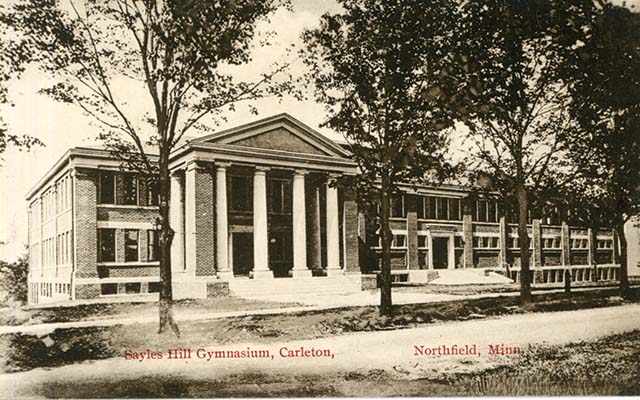 Sayles-Hill Gymnasium, now used as Carleton’s Campus Center, was dedicated on Jan. 26, 1910. As the “March Madness” of the collegiate basketball season is upon us, it is timely to take note of the 100th anniversary of this building that has served Carleton so well for so long.

The formal dedication of the long-awaited gym started at 10:30 a.m. in Willis Hall Chapel. Noted New York concert singer Edward (Ned) Strong (son of Carleton’s first president, James W. Strong) sang a piece from Haydn’s “Creation” and an address by President J.T.H. Main of Grinnell College followed. The topic was “The Place of Greek in the College Curriculum.” The Northfield Independent of Jan. 27 praised this “effective speech” in which Main disputed the idea that Greek had outlived its usefulness. According to the Jan. 29 Northfield News account, Main tied his subject to the dedication “by reference to the important place given to athletics by the Greeks.”

The gym was then opened for public inspection. The afternoon program at the gym began with performances from the college band and glee club. The formal presentation of the building was made by Fred B. Hill who, with his wife, Rhode Island heiress Deborah Sayles Hill, had provided more than $60,000 for the construction. The gym was named in honor of the couple’s parents. Fred Hill (Carleton class of 1900) was a professor of Biblical literature at Carleton who had excelled in baseball during his college years. The Northfield News of Jan. 29 quoted him as hoping “that this building may ever encourage and foster stalwart, virile and Christlike manhood among the students of Carleton College.” Carleton’s President, Donald J. Cowling, then gave a few facts about the building: the floor space of the gymnasium was 60 by 125 feet, there were 175 lockers with room for 50 more, the swimming pool was 9 feet deep and measured 25 by 60 feet; the batting cage was 20 by 75 feet, a recreation room was 20 by 40 feet, a trophy room was 19 by 20 feet and a reading room was 20 by 25 feet. Physical training would be available to all men and “an effort will be made to correct and assist any physical defects or weaknesses in students.”

St. Olaf College President John Kildahl was then called upon to speak and, according to the News, he “made one of the happiest addresses of the afternoon” as he brought greetings, congratulations and some envy from Manitou Heights (where St. Olaf’s own gymnasium would not be dedicated until 1920). Kildahl said that “he himself was an example of the need of physical culture, and spoke of the great benefit such a building would afford. There was a time when the pale and lean man was the aristocrat of college life, but that day had long since passed. He closed his remarks by saying that he did not covet the new gymnasium, for that was not right, but that he would not object to having one just like it set on the other hill.”

The dedication activities were climaxed that evening by a free recital at the gym by Edward Strong before a packed house. The News reported that Strong sang 19 numbers of his own choosing, and that the concert was a “magnificent treat, artistic throughout,” with a wide variance, “the gay and the somber, the rollicking and the droll, the plaintive and the robust.”

The Independent’s account of the day’s activities concluded: “The crying need for years has been a suitable gymnasium for the men, and when this need has been filled so completely as it has been here, great results naturally will be expected. It is hoped that this will build up, not only a strong physical department, but that it will promote a spirit of fellowship and brotherhood such as the school has never seen before.” The newspaper expected that it would induce “many more men” to come to Carleton.

Carleton had a basketball tradition dating back to 1892, a year after YMCA instructor James Naismith invented the game of “basket ball” in Springfield, Mass., using peach baskets as receptacles. Naismith’s friend, Max Exner (who had participated in the first game ever played), became a student at Carleton in 1892 and was hired as an instructor of “physical culture” for both men and women. Carleton women took an immediate interest in the new game and played it in a small gymnasium room in Gridley Hall. It would not be until March, 1965, however, that the women’s physical education department would have a building of its own, the Elizabeth Cowling Recreation Center for Women, named after the wife of Carleton’s third president.

Following years of unofficial club basketball play, the first official men’s basketball game was played at Sayles-Hill on Jan. 22, 1910, just days before the dedication ceremonies. Carleton was victorious over Pillsbury Academy 27-11. On Feb. 5, St. Olaf played its first game at Sayles-Hill, defeating Carleton 22-8. The Northfield News of Feb. 12 said that although “Carleton played a fast and hard game,” St. Olaf entered the second half excelling in team work and individual play, “with a spirit which swept the Carleton men off their feet.”

On Feb. 17, 1913, St. Olaf rooters brought to the game at Sayles-Hill a wooden animal with a whisk-broom for whiskers which was labeled “Carleton’s Goat.” Carleton had won the first contest of the season and, after a second victory, Carleton claimed that goat as its own until St. Olaf could score a double victory in one season to win it back. (This season, St. Olaf won the first match, but Carleton retained the goat after a victory over St. Olaf on Feb. 1 and now leads the “Goat Series” 100-85.)

In early April of 1913, Sayles-Hill hosted the first state high school basketball tournament. With larger schools having been eliminated, Fosston and Mountain Lake played for the championship, with Fosston prevailing by 29-27. The state tournament was moved to the Twin Cities in 1923 to accommodate larger crowds. (Northfield High School played once in the Sayles-Hill tournament in 1916, losing in the first round to St. Paul Mechanical Arts.)

On Jan. 23 of this year, Carleton celebrated “100 Years of Varsity Hoops at Carleton College” with a reception for current and former players and the public after the men’s victory over St. John’s. There was a sideshow of basketball over the years and a brochure of past century highlights prepared by Matt Hart (Carleton Class of 2011), David Pape (sports information director) and Eric Sieger (director of media and public relations).

The “Golden Age” of the 1920s saw Carleton capture three MIAC (Minnesota Intercollegiate Athletic Conference) titles under coach Dean Everett. According to Carleton archivist, Eric Hillemann, Everett’s teams achieved a record 46-4 from 1921-24, including seven wins over non-college teams. Ozzie Cowles then took over, leaving in 1930 with a record of 65-26 after six seasons. Marshall Diebold succeeded Cowles and left in 1942 with a record of 122-74-1.

On Dec. 7, 1926, Carleton defeated Eau Claire Normal at home and did not lose on the home court again until Jan. 11, 1935. This loss to Cornell, 28-23, represented an end to a home winning streak of 64 in a row, which was a national record at that time and still stands as record for Minnesota colleges. During the 1930s, Diebold coached the teams to two victories each over the universities of Iowa and Minnesota, with victories over Chicago and Wisconsin, as well, leading sports writers to call Carleton “the 11th member of the Big Ten.”

In 1950, Mel Taube came to Carleton from Purdue to coach basketball, football and baseball and he led the team to four Midwest Conference basketball titles between 1952-58. Remarkably, since 1960, Carleton has had only two men’s basketball coaches: Jack Thurnblad, from 1960-84 and Guy Kalland, 1984 to the present.

Thurnblad was the last to coach men’s basketball at Sayles-Hill. On May 20, 1964, West Gymnasium was dedicated and since the 1964-65 season, this gym has been home to the Knights. The basketball court here was named in honor of Jack and Jinny Thurnblad in 2009. West Gym was designed by Minoru Yamasaki, who also designed the Twin Towers of the World Trade Center, built in the 1970s and destroyed by terrorists on Sept. 11, 2001.

And what became of Sayles-Hill? The gym was used as a multi-purpose room for registration, dances, concerts and plays. In 1979, this historic building was redesigned and replaced Willis Hall as the Carleton Center. Today Sayles-Hill contains the post office, career center, bookstore, radio station, snack bar and game room with pool tables. In October of 1979, a portrait of Carleton’s first president, James W. Strong, was taken and held hostage by students demanding that the Sayles-Hill pinball room be named after Peter Tork of the pop group the Monkees who had attended Carleton 1959-62. On March 5, 1980, the Peter Tork Pinball Area was dedicated in Sayles-Hill with a sign and a champagne reception, as officials capitulated to the pressure. Unfortunately, the sign has since disappeared.

Although no longer home to basketball throngs or memorials to Peter Tork, Sayles-Hill continues to have a vitality and versatility not only as a crossroads for campus activities, but also for Northfield residents. Last December, the Beaux Arts Ball, which celebrated 50 years of the Northfield Arts Guild, made use of the Great Space area, which used to be the basketball court. I think Fred and Deborah Sayles Hill would have approved. 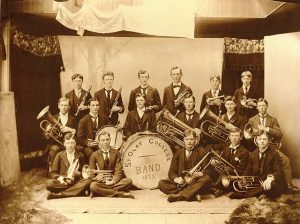 The Early Years of the St. Olaf Band 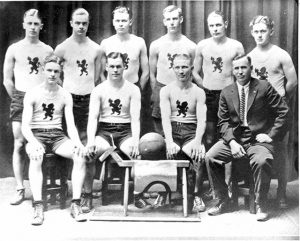 Carls-Oles Fight Over Old Goat Since 1913