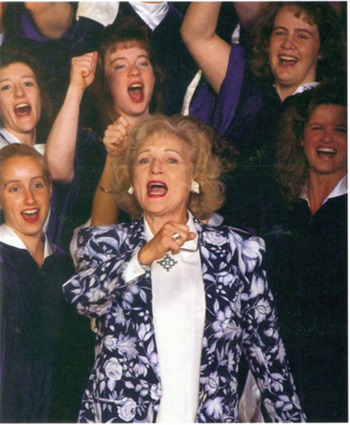 When I lived in New York and told anyone that my alma mater was St. Olaf, more often than not the response was, “Oh, St. Olaf. Like in ‘The Golden Girls’!” Perhaps you, too, have had that experience while traveling. Say the words “St. Olaf” and many outsiders think of the fictional town of St. Olaf, Minnesota, made famous by Betty White as the home-town of the naïve, childlike character Rose Nylund that she portrayed in the popular TV series, “The Golden Girls.”

A very historic happening, Northfield style, took place May 3-4, 1992, when Betty White came to the St. Olaf campus. Last July, I wrote to Betty White in Los Angeles, requesting a photograph to use with a story about her visit and she responded in a very short time with a picture dedicated to the Northfield Entertainment Guide and a handwritten letter in which she recounted her memories of that time.

Here is the text of that letter:

Thanks so much for your nice letter. I remember my visit to St. Olaf very well. I was a little apprehensive as I was afraid they would resent the fact that Rose wasn’t the brightest bulb in the chandelier, but they couldn’t have been warmer and more welcoming. To this day I have my Uff Da cup and shirt.

I remember meeting an exchange student from Germany who told me a story that made me laugh. He said that when he told friends that he was going to go to school in America at St. Olaf College they would say, “Oh – Golden Girls!” He would say no and explain that St. Olaf was a school famous for its magnificent choir! And then they’d say, “Oh –we didn’t know the Golden Girls sang!!”

Please give my regards to all on your beautiful campus – and keep up that wonderful singing. 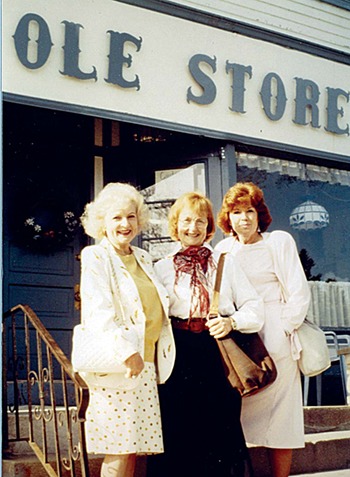 Accounts from the St. Olaf Alumni Magazine of July/August 1992, the Northfield News and Dan Jorgensen (who was then public relations director at St. Olaf) bring back other memories of those two days. Jorgensen picked up White and her assistant in Minneapolis and, as they neared Northfield, they came upon a farm dog sitting on the road. White, fearing the dog would get hit, insisted on stopping the car in order to shepherd the dog into a ditch. She told the dog, “Stay!” and returned to the car.

“There! I feel better!” said White, a well-known dog lover and animal welfare activist. (When Jorgensen looked through the rear view mirror, he saw that the dog had already resumed his position on the road.) When they got to the Archer House, White immediately bonded with another dog lover, the hotel’s owner, Dallas Haas.

The visit itself was a whirlwind of activity for the five-time Emmy award-winning actress. White created a flurry of excitement when she showed up at a St. Olaf women’s soft-ball game. She attended both a rehearsal and the spring con-cert of the St. Olaf Choir, joining the choir in singing the college fight song, “Um Yah Yah.” The next morning, she had breakfast at the Ole Store and a tour of the Northfield Historical Society museum. Seeing a photo of the outlaw Jesse James, she said, “Look at his eyes. Is it any wonder Fonda played him?”

Jorgensen took her on a driving tour of Northfield and then they returned to the campus for a chapel service. St. Olaf president, Melvin George, spoke on the topic “Becoming like children…” and concluded his talk by thanking the Rose Nylund character “for reminding all Americans, even as they giggle nervously at some of the things you do, that being open, humble, dependent, and vulnerable like a child is something to be admired, that naïveté is not all bad, and that happy endings are, in fact, what God had in mind all along when he made the world.” 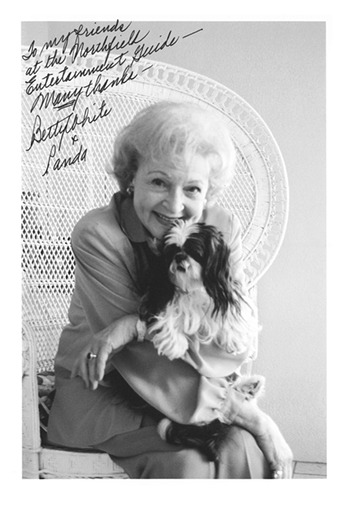 White met with student government leaders, was interviewed on WCAL and was made an honorary member of the drama society, Theta Alpha Phi. She spoke to theater majors about her long and distinguished career, including her famous role as Sue Ann Nivens on “The Mary Tyler Moore” show. A “Betty White” type was needed for the role (which she described as someone “icky, sweet, yucky”) and when they couldn’t find anybody “sickening enough,” in White’s words, they gave her the role, which became a recurring part on the last four years of the show. Contrasting the roles of Sue Ann and Rose, White said Sue Ann was this “brassy, sure-of-her-self, rotten person, and yet the writers let you peek through once in a while.” Rose, however, was “wholly honest,” and would “believe anything anybody tells her, because it makes logical, good old ‘St. Olaf sense’ to her. If you told Rose, ‘Boy, I could eat a horse,’ she’d call the SPCA.”

White told the thespians, “I feel like I’ve been seeing St. Olaf from the inside. It will make a whole difference in my Rose characterization, I can assure you. I won’t be as tentative. I will be surer-footed, because you really understand where Rose is coming from and she really is coming from your values.”

The song goes, “We come from St. Olaf, we sure are the real stuff…” and the same can be said of Betty White: She sure is the real stuff! And we will proudly show off the picture she inscribed “To my friends at the Northfield Entertainment Guide” for years to come.

Thanks to Betty White for the autographed photo and memories of her St. Olaf visit, to Dan Jorgensen for his recollections and to Jeff Sauve of the St. Olaf College Archives for research assistance.

The St. Olaf Choir visited the Hollywood set of “The Golden Girls” while on a west coast tour in 1989. Dan Jorgensen, who had helped arrange it as St. Olaf’s public relations director, said that the Oles took up about half of the 150 seats in the studio, and all were wearing blue shirts with the “St. Olaf” insignia. Later White was given a St. Olaf shirt by the choir.

Prior to the show, Betty White and Rue McClanahan (who played Blanche) surprised the audience by coming out and singing the St. Olaf College fight song, “Um Yah Yah,” which Jorgensen had taught them earlier.

“Don’t any of you know this song?” White asked, and the St. Olaf Choir joined in. It was White’s birthday and the choir sang “Happy Birthday” to her in four-part harmony. White said that after hearing those glorious voices, “Rue and I crawled off the stage. It was such fun.”

Bob Hope was a guest star that day and, along with the cast, greeted the choir after the taping. “Entertainment Tonight” covered the event, calling it “Life Imitates Art.”

It is not known exactly how the show happened to use the name St. Olaf for Rose’s quirky hometown. It has been rumored that a Carleton graduate who was a scriptwriter on “The Golden Girls” introduced it, but Carleton archivist Eric Hillemann has discounted this story. Dan Jorgensen, then public relations director at St. Olaf, got a phone call from the producers prior to the show’s debut in 1985, asking if the college would mind having a character from “St. Olaf, Minnesota” on the show. The character, Rose, would be “ditzy but fun.” Jorgensen thought it could be “to our benefit to be supportive and cooperative,” especially with such a talented person as Betty White portraying Rose, and he saw opportunities here to publicize the college. When anyone would ask about the connection, the college could say that “Rose was just a fictional character from a fictional St. Olaf,” but “the real place has a rich and storied history of its own,” said Jorgensen. So there were no objections. St. Olaf College then sent T-shirts, mugs and other items with the college name on them for use in the television series, which ran from 1985-1992 on NBC. (White continued the role of Rose on a spin-off called “The Golden Palace” for one more season.) 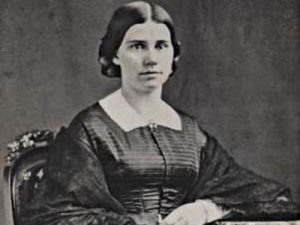 There’s a Long Tradition for Singing in Northfield 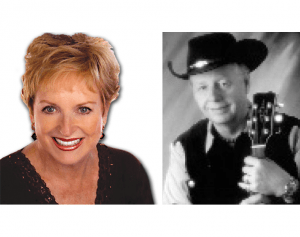 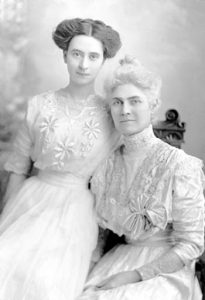 Who Was Laura Baker?