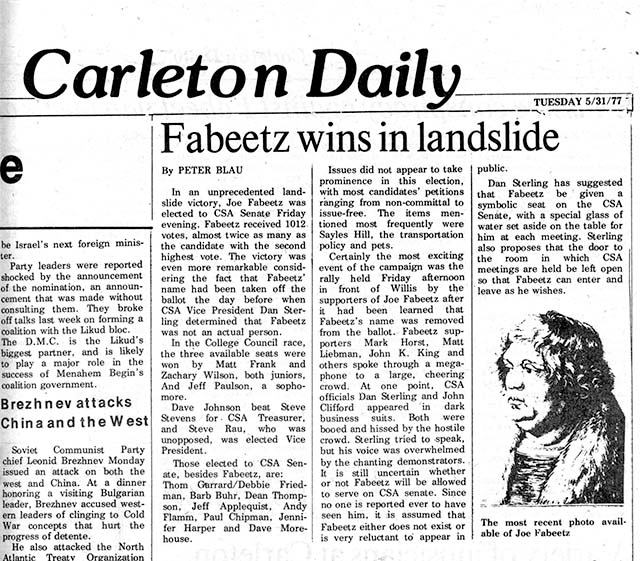 It isn’t often that Minneapolis’ major newspaper, the Associated Press and the CBS Morning News carry the results of a campaign for a college senate position. In fact, it is hard to imagine it ever happened. But that is exactly what transpired when Joe Fabeetz was elected a senator at Carleton College in May of 1977 in a landslide victory.

Joe started his unlikely climb to prominence in the Carleton Daily of Feb. 10, 1977, where he predicted the outcome of an intramural basketball game. On Feb. 18, Joe wrote a letter to the editor of the Daily opposing an “increase in availability of cars on the Carleton campus. Our society is so dependent on the automobile, it’s depressing and ridiculous.” Car use should be restricted, Joe argued, due to “environmental and social concerns.” Otherwise, “mass transportation, bicycles and walking will never become popular means of getting from point to point.”

“Carls Should Set Example” was the title of a lead editorial in the Feb. 24, 1977, Northfield News. Joe and another Carleton letter-writer were commended: “It is heartening to learn that many young people at Carleton College oppose liberalization of the college’s car policy and for some very sound reasons.” The letters “gave thoughtful support to the continuing of current policy” of restricting cars. The editorial approvingly quoted what Joe had said in conclusion: “We must realize that the overall effect of Carleton’s car policy on society may not be large, but it can be a starting point and can set an example.”

Joe next put a classified ad in the April 28, 1977, Carleton Daily, which read: “Administrators can be a nuisance as well as a joy sometimes. If any administrator is bothering you, file a complaint with Joe Fabeetz, via Campus Mail.”

What was Joe up to now? It was hard to tell. But a letter to the editor from Hoyt Boswell on May 3 announced that Joe had published the results of a two-year study in which he determined that an average of 23 percent of each radish goes to waste when the greens are cut off. Two days later, Joe made an intramural volleyball pick in the Daily. Finally, Joe got his own byline on the sports page on May 12, writing about the men’s tennis team. One sentence stood out: “Hamline, according to one source close to the team, ‘resembled high school kids’ as they forfeited two matches because of lack of players and hemorrhoids.”

In May of 1977, Joe was ready to put his growing popularity on the line. He registered to run for CSA senator. His picture and platform appeared in the May 26, 1977, Daily. The picture looked suspiciously like an Albrecht Dürer engraving of Dürer’s good friend, Willibald Pirckheimer, from the year 1524 (I am not making this up). Joe’s platform is best not repeated here, but his plaintive concluding sentences still resonate through time: “We are taught to grovel in the dust of ages, worshipping the earth once walked upon.  As for myself, I’m not just running for CSA senate; I’m running for my life…for my reality.”

Unfortunately for Joe, his “reality” became the major issue of his campaign. His name was removed from the ballot by the CSA vice president on the grounds that Joe did not, in fact, exist. A letter to the editor in the May 27, 1977, Daily pointed out that “the student handbook does not require that a candidate be an actual person.”

Mark Horst (Northfield High Class of 1973 and Carleton Class of 1977) admits that he assisted Joe Fabeetz with his campaign but says he can “hardly take credit for his campaign or his election or much of what he has said and continues (much to my astonishment) to say.” After graduation, Horst went on to earn a Master of Divinity degree from Yale Divinity School in 1981 and a Ph.D. in religious studies from Yale in 1985. He is now a minister at the First United Methodist Church of Stillwater, with a son who is a 2006 St. Olaf graduate. Rev. Horst was kind enough to replied to an e-mail of inquiry I sent to him last December and provided a description of what happened that May. Here it is:

“Of course the election officials (whoever they were) refused to include his name on the ballot because, they claimed, he was only imaginary. This set off a furor among those of us who believed that this kind of judgment raised more philosophical issues than it resolved. We believed that if we could see ‘eternity in a grain of sand’ that surely Joe Fabeetz was something true and possibly beautiful and certainly worth electing.

“We saw no alternative but to mount a massive write-in campaign for Joe Fabeetz – which included using a megaphone we appropriated from the drama department and staging spontaneous rallies around the campus. These included lengthy quotations from Jimi Hendrix (well I stand up next to a mountain, chop it down with the edge of my hand…pick up the pretty pieces, and make an island in the sand…) and Ubi Roi (as I recall).

“Of course Joe was elected.  Unless I’m imagining the whole thing.”

The May 31, 1977, Carleton Daily reported that Joe Fabeetz received 1,012 votes, double the total of the candidate with the second highest vote. Classified ads announced that Joe Fabeetz T-shirts were now on sale. CSA President Ada Posey protested, “We can’t seat an imaginary person.” (Tempered by this experience, she went on to become director of administration for the Clinton White House in the 1990s.) National media took note of Joe’s triumph, including the Minneapolis Tribune, the Associated Press and the CBS Morning News. Alas, an opinion column by Hoyt Boswell in the Daily gave the alarming news that Joe had been shot in the back with a crossbow in the Arboretum. (Reportedly, as he lost consciousness, Joe murmured, “What a shaft.”) Boswell wrote that the conspiracy against Joe’s life was “far deeper than a run of the mill attempted assassination of a CSA candidate; it was a desperate cry of fear of an unknown expanse.”

Joe recovered over the summer, however, and the Sept. 23, 1977, Carletonian said that he was “providing the intellectual inspiration” for an intramural football team. By spring term of 1978, Joe had his own radio show (“Joe Fabeetz Sings the Blues”) on KRLX-AM on Saturday mornings. Then, on Nov. 3, 1978, Joe announced in a letter to the editor that he intended to claim his Senate seat. Better late than never, perhaps, but he was not heard from again until the Carletonian of Jan. 7, 1979. At this time, he was a member of an intramural basketball team called “The Nads” (their cheer: “Go, Nads!”). Joe is quoted as saying, “Hell, the only reason we’re losing is because they have more points than us.” (Joe was not an English major.)

A potential blow to Joe’s viability was eliminated when Joe was specifically exempted from a new policy for Letters to the Editor announced in the Carletonian of April 20, 1979. Henceforth, all letters were to be signed and actual names published, except for “Carleton’s mythical favorites, like Schiller or Joe Fabeetz.” A Joe Fabeetz Sports Quiz was inaugurated in the paper that spring.

A year later, Joe surfaced once more as a sportswriter for the Carletonian and in the fall of 1980, unable to resist the lure of politics, Joe endorsed the candidacy of John Anderson for U.S. President in a letter to the editor. Joe emerged yet again in the Carletonian of Jan. 15, 1982, with the declaration that “The reports of my graduation have been greatly exaggerated.” Joe said he was “alive, well and still dropping classes.” His last letter to the editor came in the March 4, 1983, Carletonian. Now an alum, he protested against the ending of the Rotblatt baseball leagues.

So, was that the end of Joe Fabeetz? Of course not! Joe and I are now Facebook friends. I am part of an elite group of 41 friends, including Friedrich Schiller and Thorstein Veblen. Joe is still using the picture of Pirckheimer and prominently displays the words from his 1977 campaign platform on Facebook: “I did not just run for Carleton Student Association (CSA) senate; I ran for my life…for my reality.”

I am still puzzling over his latest entry last Dec. 28: “Joe Fabeetz agrees time flies like an arrow, but fruit flies like a banana.”

Whoever and wherever Joe is, I wish him a happy reality.

Thanks to Carleton archivist Eric Hillemann, Fabeetz supporter Rev. Mark Horst and, of course, to Joe Fabeetz himself. 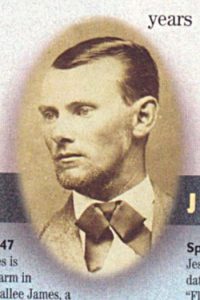 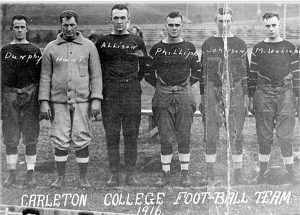 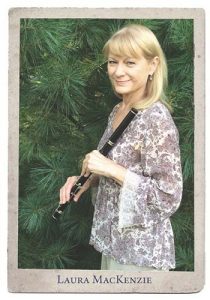