“Northfielders Have Forever Found Fun, Even in the Frigid Days of February.” That was the title of my first column for the Northfield Entertainment Guide in February of 2007. The story took note of past entertainment options in town, including oratorical contests between St. Olaf and Carleton at the Ware Auditorium (now the Grand) and Carleton professor Larry Gould’s February 1933 lecture at Skinner Chapel with motion pictures and “glorious colored slides” of his participation in the Byrd expedition to the South Pole.

In keeping with the February 2011 Northfield Entertainment Guide’s theme of “Best of Northfield” and kicking off the start of my fifth year as columnist, I am hereby presenting what I am calling “Best of Historic Happenings,” with a few updates on past topics along the way.

The first year of the column looked back on what was happening in that month in years past. For March, I wrote of audiences watching Japan’s “top spinner and magician” Prince Ogawa and “the remarkable hand balancer and contortionist” Frank Kamekichi at the Lockwood Opera House in 1897. In April of 1890, H.T. (“Tel”) Budd invited everyone to an Easter Masquerade Ball “with the privilege of dancing after 11 o’clock.” Budd later was featured in “Ripley’s Believe It or Not” as the world’s oldest barber, working 70 continuous years. Carleton students danced around a May pole at the first of many May Fetes in 1909 and hosted the world premiere of “The Caucasian Chalk Circle” by renowned German playwright Bertolt Brecht in May of 1948. 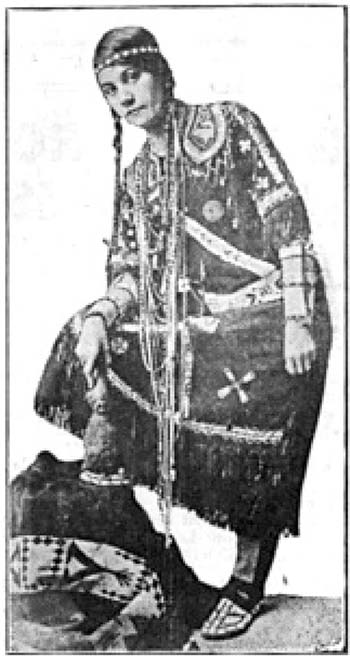 The Circuit Chautauqua highlighted Junes in the early 20th century, with tent meetings offering culture and entertainment for the masses, such as a lecture on “startling experiences with beasts, cannibals and pygmies in Dark Africa” and “a plea for her vanishing race” by Princess Neawanna about her Ojibwa Indian tribe. Also in June: the six-state Bicentennial tour of the Northfield Boys Chorus. For July, I wrote of community picnics which included concerts, greased pig contests, boxing matches, horseshoe tournaments, a baseball game, a tug of war, races (including one for fat men) and fireworks.

My next column told the astonishing, tragic tale of Aug. 19, 1915, when a lion tamer with a visiting carnival was attacked by five lions in front of spectators and died from loss of blood at the Northfield Hospital. A happier lion tale occurred on Aug. 10, 1929, when Leo, the Metro Goldwyn Mayer lion, paid a visit to the Grand Theater. In September I wrote of “The First Jesse James Day” in 1948 (when all men were encouraged to grow beards or be confined in stocks) and of the Rice County Fair, which was held in Northfield for 71 years until wrested away by Faribault in 1938.

“With fall comes football!” was the title in October. The column recounted the state championship game between underdog Northfield High School and Minneapolis South Side High School in 1898 (which ended in a scoreless tie) and the 7-0 upset victory of Carleton over the University of Chicago at Chicago in 1916 (headline: “Northfield Boy Carries Ball Over Line in Second Quarter…Chicago Astounded”).

November’s column began with the story of the helicopter which flew over Laird Field during a Carleton football game in 1962, with the bust of the German poet Friedrich von Schiller dangling at the end of a 50-foot chain. The bust, first purloined by students in 1957, has been passed from class to class and pops up at various campus events, including commencement in 1977 when the bust was given a diploma.

Most notably, President Bill Clinton held up the bust of Schiller as a “souvenir from my stay here” when he gave Carleton’s commencement address in 2000. And last fall Carleton’s new president, Steven G. Poskanzer (after being entrusted with the bust), snapped photos with a self-timer of his burgeoning relationship with the bust: shaving with Schiller, riding a scooter, donning matching ties, dining by candlelight together.

The first column of 2008 was about the Kickapoo Indian Medicine Co. which sold remedies and entertained Northfield in January of 1895 with vaudeville acts. Also pictured were Dr. Visty and Lilly Hangtree, purveyors of Dr. Visty’s Vitalic Elixir during Defeat of Jesse James Days. Despite claims for its curative powers, the elixir contained only apple cider vinegar and Northfield tap water.

In the first annual Northfield Music issue of the Guide in May, my column focused on Northfield’s Hall of Fame performers, Marilyn Sellars and Johnny Western. Sellars’ first album, “One Day at a Time,” charted nationally for 43 weeks, even topping Elvis Presley on the top country LP list. Western played guitar with Johnny Cash and wrote “The Ballad of Paladin” which he sang for the TV show, “Have Gun Will Travel.” Sellars and Western performed together on the 4th of July in Northfield in 2005 and Sellars was featured at Three Links’ 110th Anniversary concert in March of 2009.

Peter Tork, a member of the famed 1960s musical group, the Monkees, was the subject of my June 2008 column. Why? Because Peter Tork attended Carleton College where he was a radio DJ and active in dramatics. (He dropped out twice, alas, so cannot be claimed as a graduate.) A pinball area was named in his honor in the Sayles-Hill Campus Center in 1980 after students held a portrait of Carleton’s first president hostage. In July, I wrote of three St. Olaf graduates who had conquered the Big Apple: soprano soloist Irene Gubrud (’66); French horn player and Broadway musical contractor Ron Sell (’66); and French horn soloist and composer Sharon Moe (’64). Since I had played in the St. Olaf Band with Irene and Ron, it was a pleasure catching up with them. Last December, Marilyn Sellars and I attended a fascinating workshop at the Northfield Retirement Center put on by Irene and her husband Steven Finch on “Music, Aging and the Brain” about how music can be used to stimulate new neural connections.

Nancy Ringham of St. Olaf (’77) and Sylvia Rhyne of Carleton (’78) were featured in August 2008. Ringham lived the classic Broadway story: understudy steps into leading role. In 1980 she played Eliza opposite Rex Harrison in the 25th anniversary revival of “My Fair Lady.” Rhyne’s signature role has been as Christine in “The Phantom of the Opera” and she now performs medieval music in a duo called “Asteria” with Eric Redlinger (including a 2010 stop at Carleton).

Wayne Eddy recounted 40 years of KYMN history for me in September. Eddy, a member of the Minnesota Broadcasting Hall of Fame, initiated the first broadcast of KYMN on Sept. 27, 1968. He continues to host “The Wayne Eddy Affair” Monday through Friday mornings.

So what was Betty White doing on the cover of the October 2008 Guide? She was shown singing “Um Yah Yah” with the St. Olaf Choir during her visit to St. Olaf in May of 1992. Inside was a photo of her inscribed “to my friends at the Northfield Entertainment Guide.” In a letter to me, White had written that since the character Rose from “St. Olaf, Minnesota” that she portrayed on TV’s “Golden Girls” was not “the brightest bulb in the chandelier,” she had been apprehensive about her visit. But the college “couldn’t have been warmer and more welcoming. To this day I have my

Uff Da cup and shirt.” Of course, this seven-time Emmy award-winner had a banner year in 2010 at age 88, starting with a very entertaining Super Bowl commercial, then hosting “Saturday Night Live” and being one of the most searched-for names on the Internet.

For November, I wrote a column, “Drop Back Ten Meters and Punt,” about the only NCAA metric football game ever played between Carleton and St. Olaf on Sept. 17, 1977.  I finished the year by writing about Barack Obama’s February 1999 convocation talk at Carleton College.

The January column detailed Dwight Eisenhower’s Sept. 16, 1952, campaignstop in Northfield, which filled Laird Stadium beyond its 9,000 capacity, and summarized nine presidential visits to our town from 1908-2004. February and March brought columns on founder John North’s ties to Abraham Lincoln and the 110th anniversary of Odd Fellows/Three Links. April’s column started with “Today’s Jeopardy Answer: Eric Hillemann, Joseph Crippen and George Soule.” The question: “Who are Northfield’s Quiz Show Aces?” All three men won on “Jeopardy,” but Carleton archivist Eric Hillemann also has the distinction of helping Kevin Olmstead win a record $2.18 million dollars as a lifeline on “Who Wants to Be a Millionaire.” In May, I wrote of Northfield’s oldest building, the Lyceum, which later became the basis of a book for the Northfield Historical Society.

For the second annual music issue in June, I wrote of the long tradition of singing in Northfield, followed by a column in July on Northfield’s first 1861 flag and, in August, a history of the Northfield Arts Guild’s own musical melodrama “Jesse,” which had its genesis in 1976 and has been revived by the new Lockwood Theater Company. September and October columns focused on remarkable artist and adventurer Bryan Moon (his James-Younger Gang as cats prints are for sale at the Northfield Historical Society) and the almost-forgotten founder of Carleton’s art department, the “unsinkable” Scotsman (survivor of the Lusitania), Ian B. Stoughton Holbourn.

I closed the year with two columns on college football in Northfield, spanning the years 1883-1917 and 1918-1950. My research established that the football Goatrophy between St. Olaf and Carleton was created by Dr. R.B. Fouch of Minneapolis, who also created the “Slab of Bacon” trophy which preceded the current Paul Bunyan’s ax trophy fought over between the U. of Minn. and U. of Wis. in football.

Last year’s columns began with “Northfield’s 1941-42 Winter Carnivals,” and a picture of Joe DiMaggio shaking hands with Northfield’s Winter Carnival King during a visit to his then-wife Dorothy’s sister who lived here. Carleton’s fabulous, fictitious Joe Fabeetz, elected by a landslide to the college senate in 1977, was featured in February. Fabeetz lives on today in legend and on Facebook. Two centennials were noted in columns that followed: Carleton’s Sayles-Hill in March and the Carnegie Library in April.

My love affair with Hiram Scriver, early town merchant, was the subject of my May column. The third annual music issue of June celebrated Carleton’s Night Crawlers, rock favorites of the 1960s, led by Marc Reigel. Three of the four delighted Carls, Oles and townies of that era by reuniting for a gig at Froggy Bottoms on May 1. 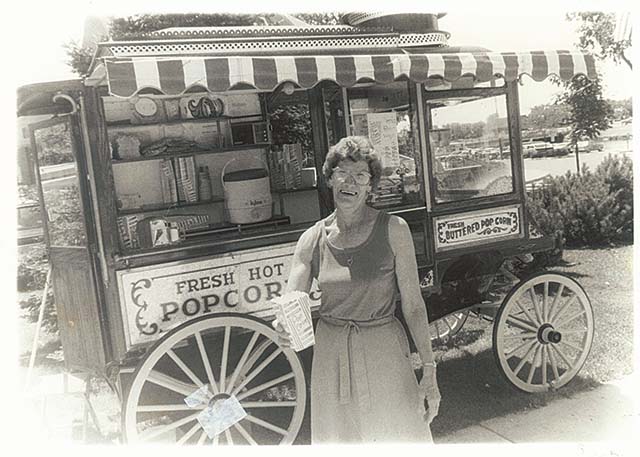 In honor of August’s Vintage Band Festival, I wrote of my experiences on the St. Olaf Band tour of Germany, Norway and Denmark in 1966 and of our director Miles (Mity) Johnson, truly the “heart and soul of the St. Olaf Band” from 1957 to 1994. His legacy is continued by Timothy Mahr (St. Olaf ’78). Jimmy Gillette, Carleton’s famed band director, composer and organist from 1923 to 1937, was featured in September. I interviewed talented artist L.K. Hanson, St. Olaf ’66 and long-time Star Tribune staffer, for our third annual October Visual Arts issue and, sadly, had to write “Farewell to Froggy Bottoms, 2001-2010” for November after the September flood destroyed the pub.

My December column detailed some of the research finds of my book about the Lyceum and I concluded my fourth year as columnist last month with a look at the temperance movement of Northfield, which was promoted by ax-wielding settlers.

What will the fifth year bring? With history happening every day, I can’t wait to find out myself. 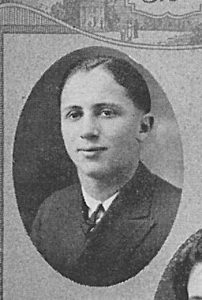 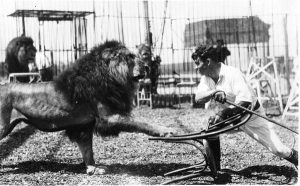 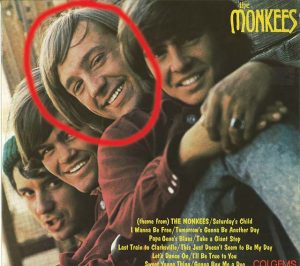