As I drove into the driveway of the hilltop home of Bryan Moon outside of Cannon Falls, I saw the first whimsical touch of this artist known for fanciful humor. There it was, a parking meter. Should I search for change, I wondered?

Moon greeted me cheerfully and gave me a tour of the home and his upstairs studio, decorated with artistic renderings from a life which has been filled with art, aviation and adventure. His cat, Beckie, followed us up the stairs and cooperatively posed with him in front of one of Moon’s most recognized paintings: “The James-Younger Gang’s Last Raid.” The eight raiders wear cowboy hats and look watchfully ahead and to the side in front of big capital letters which spell out “First National Bank.” The raiders not only have whiskers but tails, too. These tough hombres are pussy cats.

So, how did Moon come up with the idea of portraying the James-Younger Gang as cats? Well, it’s a long story.

Moon had started out as an art student at Exeter College of Art and Southampton College in his native England. But he wound up as a vice president of Northwest Airlines in Minneapolis and had largely neglected his talent for 20 years. A couple years before he took early retirement in 1987, he was captivated again by art and found himself working long into the night. His guiding principle became, “I am only going to paint it if I absolutely know the subject.”

Moon decided he would like to paint lions. So he wrote to George Adamson, a wildlife conservationist whose story is portrayed in the 1966 movie “Born Free” about raising a lioness cub and releasing her to the wild. Adamson invited Moon to visit him in a national reserve in Kenya where, Moon said, “I started to play with his lions, wrestle with the lions, really got to know lions and all of a sudden I became a pro-cat man which I wasn’t before.”

Finding lions in short supply in Minnesota after returning from Africa, Moon told his wife, Cicely, “Maybe I ought to do something with domestic cats.” Cats, after all, have the same body language as lions. Cicely suggested that he paint the cats of the Anderson House Hotel in Wabasha, where guests were allowed to take cats provided by the owners to their rooms for overnight stays. (This hotel opened in 1856 and closed in March of this year.) So he did.

One day Cicely heard him laughing in his studio and asked him what he was laughing about. He said, “Well, I just had this funny idea about a whimsical piece on the James-Younger Gang.” Moon went to Northfield for background on the gang and used some of the Anderson House cats as models for his new project. The only two cats he chose to portray specific outlaws were two ginger-colored cats for Jesse and Frank James. (“When you are doing whimsical, you can get away with murder,” said Moon, “because you’re not pretending anything is real anymore, but to that extent I thought through the relationship of Frank and Jesse.”) Moon then brought both cat pictures to his publisher, Hadley House.

“They really liked the Anderson cats and were definitely going to print that. They were not too sure about this James-Younger Gang for the first whimsical.” So Moon proposed that prints of both paintings be offered at an upcoming exhibition at the Hyatt Regency Hotel. The publisher would be at one booth with the Anderson cats and Moon at another with the James-Younger cats and Moon said, “I’ll bet we outsell you.” At the end of the exhibition, the publisher said, “We did all right. We sold 18 prints, that’s very good. How many did you sell?”

The “James-Younger Gang’s Last Raid,” copyrighted in 1988, has been reprinted eight times and has sold nearly 30,000 prints, which may make it the top-selling whimsical print in the United States. Jean Winzenburg of Hadley House told me, “His sales have been phenomenal. People have always received Bryan’s art favorably.  I think they relate as pet owners to seeing pets in whimsical situations.” Leanin’ Tree Publishing in Colorado prints 30 or 40 different greeting cards with Moon’s designs and “the James-Younger Gang is always in the top ten,” said Moon. Besides greeting cards, the cowboy cat gang appears in puzzle form, on plates, wall hangers, stitch kits, bookmarks, note cards, magnets, etc.

“It just keeps going,” said Moon, adding, “If I knew the secret to why, I would paint more like it! But who knows the secret as to why one picture takes off and another one doesn’t.”

After Moon received the first prints, he sent one to the bank manager of the First National Bank in Northfield, with a polite note saying, “Hope you don’t mind the whimsical interpretation of the famous raid on your bank.” Moon said, “He apparently was not impressed since he did not reply!” Current officials at the First National Bank had no knowledge of this incident, but Vice President Rick Estenson asked me to give Moon a Jesse James bobblehead doll as somewhat of a “peace offering.” In return, Moon sent the bank another print of the “Last Raid,” along with one for the Northfield Historical Society. Estenson promises to frame “this wonderful print” and find a place to display it.

Living with lions is only one of Moon’s adventures. He went to the base training camp for explorer Will Steger’s expeditions to the North and South Poles and painted the sled dogs, 12 in one month alone. For a commemorative work on the 200th anniversary in 1989 of the mutiny on the Bounty, in order to “live the subject,” Moon sailed 1300 miles from Tahiti to Pitcairn Island to stay with the descendants of the mutiny who live there.

Moon’s long-standing fascination with aviation led to what would become his life’s mission: seeking downed aircraft and remains from World War II. Moon spent three years in the British Royal Air Force after World War II and worked for British aviation companies before emigrating to the United States to become a vice president of Aloha Airlines in Hawaii and then Northwest Airlines. Moon traces his aviation interest to the thrilling childhood experience of bicycling to a nearby American base to watch the bombers take off.

Moon was drawn to studying the history of World War II since he had lived through it as a child who was taken from the bombed cities to the countryside for safety. He focused on the first bombing raid on Japan, led by Jimmy Doolittle in 1942 when 16 bombers were lost. Five of the surviving crew members that Moon contacted remembered where their planes had crashed when they parachuted into China. In 1990, Moon got permission from the Chinese government to come with an expedition to try to find the lost bombers. Moon met “the Chinese people who had saved the airplanes and protected them from the Japanese” and, he said, three of the bombers were located. In 1991, Moon returned and brought five villagers (“all elderly people who’d never been out of their villages, let alone their country”) back to America to “reunite them with the airmen they’d saved years ago.” Moon reunited them on the stage of the Sheldon Theatre in Red Wing, after which they gave a program at the U.S. Air Force Academy in Colorado Springs and traveled to the White House at the invitation of the first President Bush.

“When they went back to China, they were famous, because all the press wanted to interview them, for film, TV and everything else. We photographed everything they did for two weeks and gave them albums of all the pictures. That was a very special time for us,” said Moon. Subsequently this was featured by CBS newsman Charles Kurault for his Sunday morning show.

During one of Moon’s missions, remains of airmen were discovered and, said Moon, “That changed my whole life because I suddenly decided right there, we shouldn’t be concentrating on airplanes, we should be bringing back MIAs and this is something I can do.” Since founding MIA Hunters with his son, Christopher, in 1990, Moon has spearheaded 24 missions in which more than 200 MIA remains have been found. Moon is justifiably proud that last year his group was “recognized by the U.S. Department of Defense as the number one MIA search group in America.” The discoveries are all reported to the U.S. Army for follow-up. All who go on the expeditions are volunteers who pay their own way.

Missions are currently concentrating on Papua New Guinea “because there are still 650 airplanes missing and their crews.” Moon stressed that this number does not include Australian and Japanese airplanes, just American. Moon is very eloquent on the subject of the MIA world, where he estimates that there are 1,800 American MIAs from the Vietnam War, 8,500 from Korea and 76,000 from World War II.

“It’s 65 years ago since the war ended, how can we leave 76,000 of our finest young men and women behind? It’s unconscionable! Why isn’t the country up in arms? I don’t understand it.”

With so many remains to recover, Moon decided to use multiple targets. To find someone in the jungle, said Moon, “You go to the natives.” So Moon put native trackers on a payroll to find sites. Within three months, the trackers had found 12 crash sites for exploration during the 2007 mission. In 2008, eight more sites were investigated. The next mission is scheduled for May of 2010 and Moon started by giving his trackers 20 months to find 40 sites in two areas of New Guinea. “They’ve already found 48 sites,” said Moon, who expects there may be 80 sites by the time the group leaves on this 25th mission.

Moon is so committed to this mission of bring back MIAs that “something had to go and I’m afraid art went.” He has not painted a picture for 18 months, despite proddings to do so from his publisher and his wife, Cicely. But he is not sure, at age 81, how much longer he can lead missions into the jungle and expects that someday, “I’ll pick up where I left off” with his art. However, he added, “That’s yet to happen.” 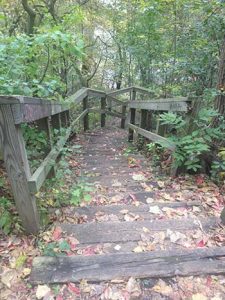 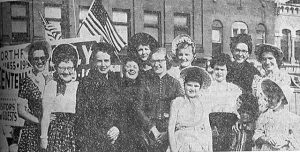 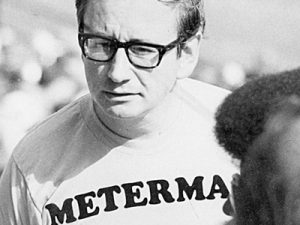 Drop Back Ten Meters and Punt: The 1977 Metric Football Game