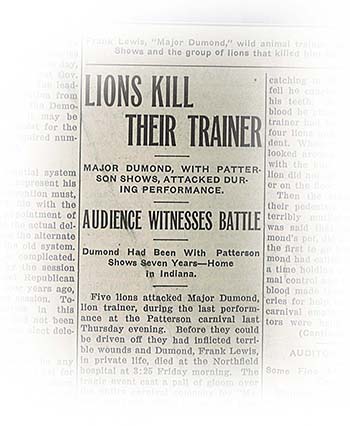 On Aug. 19, 1915, the Northfield Independent newspaper announced, “Carnival Shows Draw Big Crowds. Many Clever and Interesting Performances to Be Seen with Patterson Carnival Company, Now Exhibiting Here.” The scene was “the little triangle at the north end of West Water Street,” described as “the gayest and most populous spot in Northfield,” brilliantly lighted by electricity, with the trap-pings of show people lending the tents “an air of oriental enchantment.” The main show featured a large and varied collection of animals, with “a number of animal acts that are extremely clever.”

On the evening of the 19th, the audience in the main tent watched as the bears finished lumbering through their paces. The lion act was next and the lion tamer, known as Major Dumond, ushered the lions to their places on pedestals within the performing cage of the arena as they came through a passageway from the adjoining wagons. What happened next was captured in the astonishing Northfield Independent headline a week later: “Tragic Death Palls Carnival Festivity…Lion Trainer with Patterson Shows Dies in Hospital, Following Battle with Lions in Cage. Tragedy Enacted Before Audience of 300 People.”

Four of the animals had taken their places and the last lion, Romeo, was entering when, according to one account, the door to the cage fell on his tail, enraging him and causing him to attack his trainer. Another story was that Romeo had fallen off his pedestal and then his tail got caught in the door, at which point he lashed out and grabbed Dumond’s thigh with his giant teeth. Startled and in pain, Major Dumond struck a blow with his whip but the lion kept his grip and threw the man to the floor. Two other lions then leaped from their pedestals and attacked the trainer, one almost tearing off the man’s ear and the other seizing him by the throat and shoulder. The two other lions then joined in, “evidently trying to tear him to pieces,” according to the Northfield Independent account. 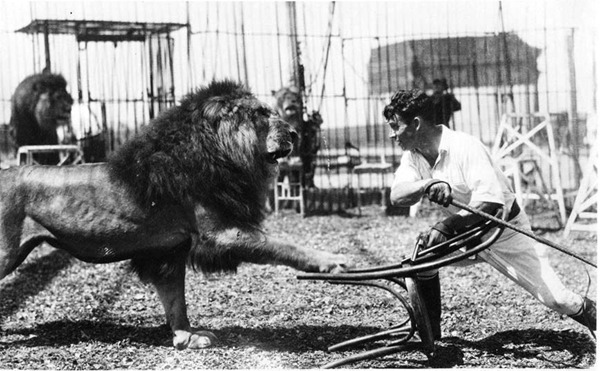 Horrified spectators ran for the exits or crowded around the stage, helplessly watching the carnage. Show attendants poked at the lions with long iron bars through the cage, to no avail. (Major Dumond, who had raised and trained all five lions, had refused to have a gun with him during the performance.) Finally, after several agonizing minutes, the owner of the show shot and killed Romeo with a revolver while other show people emptied the chambers of .22 caliber rifles from a nearby shooting gallery at the other lions. The wounded lions finally released their victim and retreated to the corner of the cage.

Gravely injured, Major Dumond was taken to the Northfield Hospital where he died from loss of blood at 3:25 in the morning. The day after the attack the carnival people formed a funeral procession, led by a band playing hymns, and marched from the show grounds to an undertaker for a service which was also attended by townspeople. Major Dumond’s remains were sent to his parents for burial in Nabbs, Indiana. Dumond, whose age was given as 28 or 32, had just been married in Minneapolis in June. His real name was Frank Lewis, and the Lewis family sent a letter of appreciation on Aug. 23, which was published in the Northfield News, thanking the citizens for “your kindness and sympathies shown in our recent trouble” and for the “beautiful floral offering.”

A far happier lion tale took place on Saturday afternoon, Aug. 10, 1929, when Leo, the Metro Goldwyn Mayer lion, paid Northfield a visit. The famous lion, who roars within the wreath at the beginning of all MGM movies, was on a world tour and one of his tour stops was the Grand Theater. The pre-tour publicity included some eye-opening facts. Leo traveled in style, with $100,000 spent for his equipment. Leo rode in a huge, motorized truck, “the most magnificent and palatial vehicle ever designed for any animal,” 24 feet over all, with Leo’s private cage occupying 13 feet. “Within the golden bars of this cage, Leo’s comfort and health is assured by white tile floor and walls, electric lights, sanitary watering and feeding troughs, unbreakable glass sides three feat high, and canvas drops that can be lowered in inclement weather.” Two other luxury cars were in Leo’s entourage, including a fully equipped office on wheels, with typewriter, desks, chairs, files and other office supplies. It is not known what kind of performance Leo put on that afternoon in front of the Grand Theater, but music was obviously a part of it. The third vehicle in Leo’s caravan transported a huge, 57-note calliope, “the largest musical instrument of its kind ever constructed.” 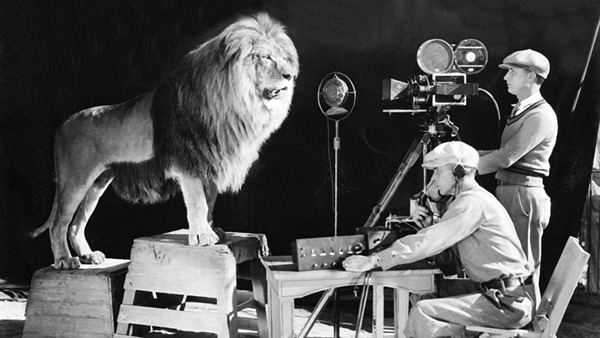 The lion logo was created in 1916 for the Goldwyn Pictures Corporation and became a trademark when Goldwyn merged with Metro and Louis B. Mayer to become MGM in 1924. About five lions have been used over the years, and the one that visited Northfield may well have been the eight-feet long, 500-pound second lion, known as Jackie. Jackie appeared at the start of all black-and-white MGM films from 1928 to 1956 and earned $1,000 a week. There is a story that during Leo’s around-the-world tour he survived two train wrecks, a flood in Mississippi, an earthquake in California, a fire and a plane crash. Now that truly is a cat with nine lives! 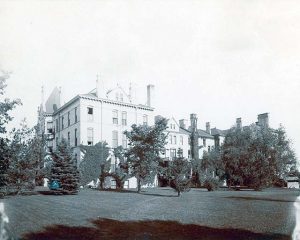 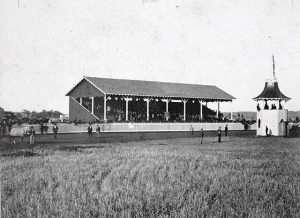 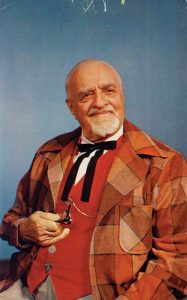