Riki Kölbl Nelson has been part of the local art scene since 1968 when she and her husband, Eric Nelson, moved to Northfield for his new position as professor of Modern British and American Literature at St. Olaf College. The umlaut over the “o” in her maiden name suggests her ethnic origin.

Riki was born in Znaim, Moravia, a small town bordering Austria in the eastern part of what is now the Czech Republic. Although the family of Friederike, her mother, lived in Moravia, Riki explained to me that they were Austrian ethnics who spoke German. Her mother, a master seamstress, had her own small business. Her father Richard Kölbl’s hometown was a small wine-growing village on the other side of the Austrian-Czech border. Her father was part of the Austrian Gendarmerie, which Riki described as “police and highway patrol rolled into one.” When Riki was three, the family moved to the rural farming community of Grossgmain outside of Salzburg, after the upheaval of World War II. Her father and mother both commuted into the city to work. Her father’s job was at the headquarters of the Gendarmerie in Salzburg. Riki and her older sister also commuted by public bus into Salzburg for school, while her younger sister still attended the local school.

Riki remembers growing up in Grossgmain, a picturesque place with meadows, woods and mountains surrounding the village. She enjoyed outdoor activities like skiing and walking in the woods and the beauty of nature became a later theme of her art. She also appreciated the culture of Salzburg, which she called “a jewel of a town,” with squares, lovely parks and castles, and public art from Gothic to baroque to contemporary.

After completing her secondary education, she would have liked to further her education with art studies, but Riki said her parents had the conventional thought of the day that “there was no point sending girls to the university because they get married, they don’t use their education.” So she found jobs and stayed at home. With a fluency in English and French as well as her native German, she ended up at the Salzburg airport as a ground hostess for Austrian Airlines, helping with ticketing and dealing with passengers and VIPS alike. After two years as an employee, she was eligible for a free flight outside of Europe and got a ticket from Austria to New York City in the fall of 1964. She decided to take an unpaid leave and explore the United States with a Greyhound Bus ticket which gave her 99 days of transportation anywhere for $99.

She started out visiting a distant relative in New Jersey and eventually found her way to North Carolina, where she visited a female English professor, Dr. H.G. Hanson, at Campbell College in Buies Creek that she had met when the professor was on sabbatical in Austria. They had a mutual interest in poetry and had corresponded after Dr. Hanson returned to the United States, exchanging poems they had written. Riki still longed to go to college and, after an article about her appeared in the school paper, things snowballed to make her dream come true. She enrolled in the college early in 1965. Riki was able to share an apartment with her mentor and “I became sort of a community project. I got a little scholarship and I worked in the school cafeteria.”

Older graduate students put on a welcome party for the new graduate students and it was there that Riki met Eric Nelson, who had grown up in a suburb of Cleveland, Ohio, and had chosen the University of North Carolina upon recommendation of a professor at his undergraduate school, Wittenberg University in Springfield, Ohio. They had the same advisor and found they had shared interests. Also, said Riki, “Eric liked my poetry.” They married within a year and, when Eric was offered a position at St. Olaf College in the fall of 1968, they moved to Northfield. (Riki had finished her graduate courses at UNC and then completed her master’s thesis in English in 1971.)

Their son, Benno, was born in 1970 and by then Riki was taking art classes on and off at St. Olaf, working on art when Benno was asleep. The first ones were sculpture classes taught by Mac Gimse and Arnold Flaten. Among other influences at St. Olaf were Jan Shoger and Wendell Arneson.

Riki had her first solo art shows featuring drawings and batiks in Salzburg and Germany in 1974-75 when they took a sabbatical year abroad and lived with Riki’s parents in Austria. Her interest in batik had been sparked by Thora Bjork at the Northfield Arts Guild. Later Riki had the chance to to study in the studio of batik master Kuswadji in Jogjakarta during her first stint as assistant field supervisor for the St. Olaf Term in Asia in 1979-80.

It was a long process but Riki attained her second B.A., this time in studio art, at St. Olaf in 1987. During this time she had a two-person show (with Barbara Smith) and a solo exhibit at the former Steensland Gallery on campus.

Poetry had always been a passion for Riki and, in the early 1970s, she and Karen Herseth Wee founded a women’s poetry group, still in existence now as “Penchant.” In 1991, Black Hat Press published Borders/Grenzen, a book of her poems in both German and English with a bicultural theme which reflected her background in Austria.

Riki went for another graduate degree, commuting to classes at the University of Minnesota starting in 1991. She earned a Master of Fine Arts degree in studio art in 1994. Her studies included drawing, painting and the making of artists’ books which was highlighted by co-teaching an honors seminar with her mentor, Joyce Lyon. She also took a class in performance art, out of which Riki emerged as Roosterwoman.

The Northfield News of April 13, 1994, announced that Riki Kölbl Nelson would be giving a one-woman performance at the Northfield Center for the Arts on April 17 as Roosterwoman, her “alter ego created out of her sense of frustration at communicating her needs artistically. She has found a way to express these needs by crowing.” When, as a young girl in Austria, she wanted to learn to whistle, she was told that “girls who whistle and chickens who crow should have their necks wrung.” Using songs and her own poetry, she took the audience along on her journey from Austria to America and showed them an “example of a woman who has gone against convention and tradition to develop into an extraordinary being unafraid to strut and crow.”

Riki told me her performance was aimed at “fighting the more restricted definition of what girls and women can do” and that her character “acted out the empowerment” that she was striving for. She wore a rooster tail, a “chicken wire bustle with ribbons” and a hat with rooster feathers. Riki said she let her “inner ham come out” and, after performances in Northfield and in Minneapolis, “the inner ham was satisfied and I was done with that.” In the MFA show at the Katherine Nash Gallery in Minneapolis, in 1994, she said she had a video running of her Roosterwoman performance, along with a stylized cabinet with a variety of pinafores and aprons hanging inside.

The artist with two bachelor’s degrees and two master’s degrees obviously values education and she has shared her knowledge through being a teacher herself. She has given art lessons to students of all ages at her home and in her studio on 5th Street.

Riki was part of the SEMAC Grant and Grace Whittier Fund program of art residencies in Northfield schools 2006-09. She teaches an ongoing workshop at the Northfield Retirement Center, has taught Elderhostel classes at St. Olaf and several courses in Northfield’s Cannon Valley Elder Collegium.

Nowhere was her dedication to education more obvious than on March 17, 2013, when Riki hosted what she called a 70 for 70 benefit at Carleton’s Weitz Center for Creativity. Having passed her 70th birthday the previous November, Riki decided to commemorate the occasion by raising scholarship money for girls by selling her art. Dina Fesler, founder of the nonprofit Children’s Culture Connection, which forges educational ties to Afghanistan, aided Riki in brainstorming how this might be accomplished. They came up with the idea of selling 70 of Riki’s pieces of art, including paintings, drawings, batiks and some fiber works, at three price points, each of which would fund one year of education for a girl from Sri Lanka, Afghanistan and India. Orphan Sponsorship International would give the scholarship money out to the girls chosen from Sri Lanka and India and Marefat High School in Kabul would handle funds raised for Afghanistan. Pictures of the girls who would be given the scholarships were on the wall at the Weitz Center and buyers could choose a picture to be attached to the back of their purchases. Thus, “the wall of girls diminished as the event went on” and, Riki said, it was a wonderful and visual way for people to see “This is what I am supporting.”

It took several months to secure the venue and there were the logistics of first storing, then transporting and hanging the 70 pieces of art. Riki was grateful for the assistance given by wonderful helpers with planning, publicity and all other aspects. Rob Schanilec and Felicia Crosby provided pro bono printing of the photos of the girls and informative text. Vern Rippley of Northfield and Riki’s son, Benno Nelson, and his wife, Amy, who had come from Los Angeles where Benno has a production company, provided expenses of food and wine from Carleton’s catering service.

A crowd of 100 people, ages from one to 90, showed up. (The one-year-old was her granddaughter, Else Bird Nelson.) Of the 70 pieces of art, ultimately all but two were sold. Riki said she is still in touch with one of the girls from Sri Lanka who was given a scholarship and hopes to meet Nick Hindman, the coordinator of Orphan Sponsorship International, soon.

One of the challenges of executing 70 for 70 was that families of girls in the countries who could benefit from a scholarship had to be convinced that, as Riki told me, “It would be good if your daughter has an education.” The idea still exists, which echoes from Riki’s own past, that a woman would not want to be more educated than her husband.

Riki, with a bit of a Roosterwoman crow, noted that having attained an MFA degree, which is terminal, “I feel I am on equal par now with my husband, Eric, and his Ph.D.”

“My love of poetry, batik, sculpture, painting and artist books, all have opened doors (for me) for education and professional opportunities. I am gratified that I could, through my art, contribute to providing opportunities for others.”
~Riki Kölbl Nelson 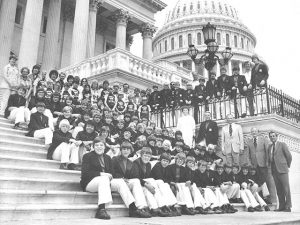 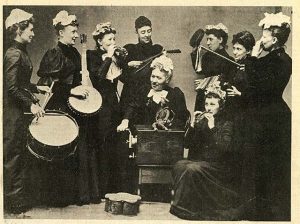 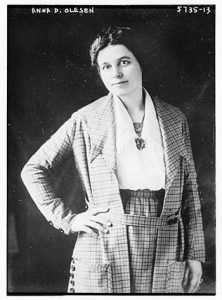 The Sensational and Strange Saga of Anna Dickie Olesen